For thousands of years, the cults of the Old One have shown their endurance. They have done so by hiding themselves in the shadows that civilization provides. The cults have been polluted through vile practices from profane revels, practicing of the ancient, and at times, insane arts of magic, while they also worshipped malignant gods that slept beyond the world of human beings. Even to this day, there has not been a day when these degenerate and obscene rituals have been suspended.

We are now in the Lord’s year nineteen hundred and twenty two. Humanity has been blessed by providence for thousands of years. At times, and for short periods, planets have aligned, or caused a gate to open between between some dismal world and the Earth. That is when, for brief periods, cults had their day, and their ancient gods succeeded in bringing forth vindictive glory, and thus brought unholy ruin on to the world. In the time between such inauspicious moments, the cult’s monstrous deities slept.

Humanity has been blessed by providence for thousands of years.

Our Lord’s year of nineteen hundred and twenty two is on us, and there are indications that say it is the right time for the return of the Old Ones. Now, they will not be engaging in days of horror, or a few restless hours, before they go back to their troubled sleep. They will linger on the Earth forever, this time, rewarding those that are devoted to them and discarding all other human lives.

A great sorcerer has come out of the shadows in this fatal hour. He had exiled himself, centuries ago, from the world of man, and remained hidden from the prying eyes of humanity. Now, this mystics arts master is back, and is the only one who has the vision to cause the Old Ones to come awake and return to the world. He wanders the earth with this end in mind, looking for independent covens and cults of the Old ones, and forcing them join his service, bringing them together to band and form a single entity called the Brotherhood.

There is a singular purpose to which the Brotherhood turns its strength and rituals. Their intention is to get together and breach the veil that has led to the separation of the human world from their own malevolent gods who are still slumbering.

They are cruel as well as strong, and they are favored by the stars to attain their objective, but even now the world is not lost.

Every power in the world has another power to balance it. A small band of adventurers and scholars have had their attention drawn to the the rise of the Brotherhood, and the sorcerer’s insane actions. More than anything else, it was through foolish luck that they stumbled on to the Brotherhood’s trail, but in the short time that they had, they have found evidence of a mad conspiracy that is so perverse and unacceptable, that its existence is not being believed by those officials in power. They will, therefore, have no help or solace, but believe that there is a chance for them to take action themselves to stop the Brotherhood.

It is really not much of a chance, but it is all that is available to humanity.

These valiant men and women travel the world while they pursue this master sorcerer. Their survival is a struggle, as they face danger wherever they go, while they undermine the actions of the sorcerer, as and when they can. They try to constantly disrupt the collective work carried out by the Brotherhood. They are trying to find the keystone item, which when destroyed, will allow them to end the plans of the Brotherhood.

They are running out of time.

The sorcerer’s secrets are being learned. They are starting to understand what needs to be done. But they are running out of time.

If they are unable to stop the Brotherhood, the world will come to an end.

Sorcerer Player: The role of the ancient sorcerer is taken on by one devious player in the game, Trail of the Brotherhood. He, this character, travels all over the globe to bring into the Brotherhood all independent cults by unifying them. Through these cults, this player must be able to acquire sufficient power so that a magical item is activated that allows the summoning of a specific Old One who is a malignant god, that the player has chosen before beginning the game. For success, the Sorcerer Player must not allow the the pursuing investigators to learn about the Great Old One that the sorcerer is trying to awaken. This can be achieved by the player in a number of ways, including misdirecting the pursuers, having cult agents attacking the investigators directly, or by calling on lesser creatures.

Once the sorcerer has, through the binding of cults to the Brotherhood, earned sufficient power, this enables him to acquire the magical item that is needed for the ceremony of summoning the Old One who has been selected. This leads to the horrific ending of the world in the twentieth century and the existence of the player becomes dependent on the bubble of malformed causality that is transient, but the bright side, is that the game is won by the Sorcerer Player.

Investigative players: The Investigative Teams are made of 1-3 other players. Their role is to prevent the Brotherhood from gathering the power required to summon the Old One into this world. This they can do, ultimately, from the clues that the activities of the Brotherhood leave behind, while they are identifying the magical item that is needed for the summoning ceremony. They must then destroy this item, after they take it from the Sorcerer or a cult, which then condemns, for the time being, the Old One to continued slumber.

When, and if, the Investigative Players destroy the item, they will have won the game. The added bonus is that the world does not end.

The game, Trail of the Brotherhood, is part deductive strategy and part adventure, where the players enter H.P. Lovecraft’s desperate world.

This article is written by one of the members of a grease trap company in Boston.

Welcome to EOS; Home of Great Games for Great Players

Whether you wish to roam the Martial Arts World as a Wandering Blade in Legends of the Wulin, or rule over the cosmic aspects of reality as a Power in Nobilis, this is the place for you... a place for adventurers, heroes, and dreamers. 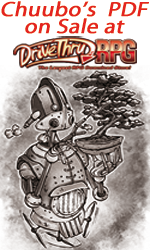